White Birch is the closest species to white pine and country living. It’s colour varies from a deep reddy brown heart stock, similar to an American black cherry, to a pale straw colour that often gets confused with hard maple. With no UV protection it will age to a richer darker version. 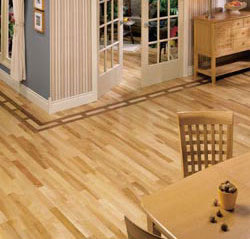 The lumber industry does not particularly select the lumber based on colour as it does in the hard maple sector. Thus we do when possible, try and create a colour match in line with your requests, but birch hardwood steps typically do have both the darker heart colours and the lighter sap wood. Let us know what is your preference and we’ll do what we can, but be prepaired for some colour variation.

Often birch is used as a substitute in the kitchen cabinet industry for a stained maple set of cabinets, because birch is much easier to stain and the overall grain of the wood looks almost identical.

We have on the odd occasion recommended this approach for steps as well, BUT birch is significantly softer then maple, especially in a horizontal, hard wear application. Thus, make this choice with caution. Birch hardwood stairs will ding and dent more significantly then its hard maple cousin. In an all adult household this may not be significant.

Birch stair treads can look much like their maple cousins, but on the average have a much more golden overtone, and rarely black streaks. They are typically mixed colour, between the darker reddy tones of the heartwood and the lighter, pale straw colour of the sapwood as suggested above.

This is a demo store for testing purposes — no orders shall be fulfilled. Dismiss