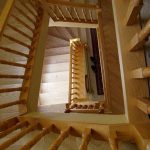 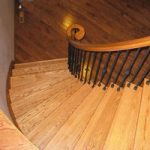 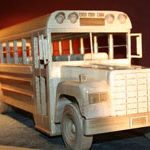 “Instead of taking the approach that was suggested by you (and the web site) when installing the new steps (your approach was to install the steps on top of existing steps after cutting any overhangs), I managed to remove the old treads, and then carefully install the new treads in their place. A different procedure altogether, but I think that the results are much nicer than to attach the new treads on top of the old treads.

However, I had to be careful to figure out how the old steps were assembled, and to do a good, strong job of attaching the new treads- it was an entirely different process, in a different sequence (i.e. starting at the bottom, then removing two treads in order to have access from behind to properly secure the lower tread, then moving up, etc). But I think that this procedure was very worthwhile” … Patrick

There is always more than one way to kick the can when you get your brain in gear, we only suggest the easiest. Karen

“The stairs look fantastic, and I can honestly say that every piece of wood shipped from Lacasse was perfect in quality, workmanship and aesthetics. I have looked around the big depot stores, and have found that for the same money, the quality is vastly inferior in every way.

Hard wood Steps: This is where you will find all the things you can learn on this website about recovering your old steps with new hardwood steps.